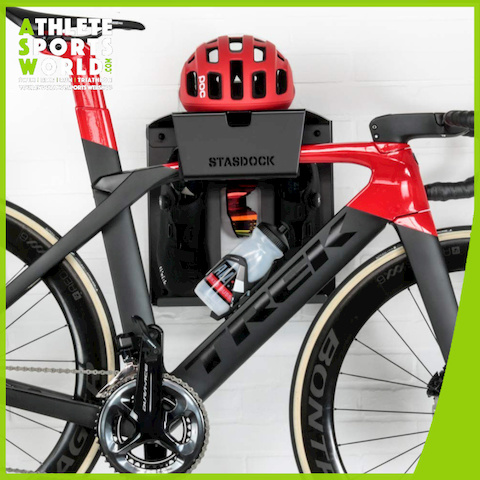 What is the suspension system for your bike? Your bike deserves a nice place to be tidied up. This can be a different place for everyone. For example, in big cities it will often be the bedroom or living room, while in smaller towns and villages it will be the garage or storage room. Wherever you live, your bike deserves a nice bike suspension system.

One of the easiest ways to put your bike away is to leave it on the ground. To leave the bike standing on its own, you have the Trivio bike stand. Here you put your rear wheel in a Y-shaped frame. The rear wheel then actually holds itself in place.  This is a quick and easy way to place a bike.

A slightly more stable way to put your bike away quickly and nicely is by using the Feedback Sport Rakk, a stable bike stand where the rear wheel is pushed against a 'pulley'. A lever, connected to a spring, provides counter pressure. Your bike is then parked on this stand, ready to be shown from all sides.

Advantage of these bike stands are:

Disadvantage of these bike stands are:

The most traditional way is to hang a bike vertically on the wall, often using the front wheel as the point of attachment to the wall bracket. By hanging different brackets next to each other, you can make sure that you can easily and efficiently tidy up your bike. The advantage is that the bikes then hang and the floor underneath is easy to keep clean.

A hook that can make this rotation is the Feedback Sport Hinge wall bracket. The bike hangs on a hook, but because it is mounted on a metal plate with hinges, you can easily push it to the side.

Advantage of these wall brackets:

Disadvantage of these wall brackets:

The newest way to put your bike away is to hang it 'along' the wall. This way is being used more and more often for bikes that can be 'seen'. The bikes are then more and more often hung in the living room or hallway where the bike is allowed to show off. A number of these systems are also designed so that you can hang up your helmet, shoes and other bicycle accessories. The brand Stasdock has designed a beautiful sturdy suspension system of 6 pounds where your racing or time trial bike may shine on the wall.

In addition to this showpiece of Stasdock Feedback Sports has 2 handy bike suspension systems for along the wall. The big difference is that in the Feedback Sports 2D version, the arms can be hung at different heights. This is especially useful if you have a bike with a demolition frame and still want it to be hung straight.

The advantage of hanging your bike along the wall:

Hang your bike along the wall:

What is the suspension system for your bike?

Maurten - Training Drink Mix Box | WE HAVE GATHERED THE GREATS

Caffeine is one of a very few supplements that can actually enhance our performance.

All things about Protein

The energy on the swim, bike run. What is the best energy source?
Twitter Feed